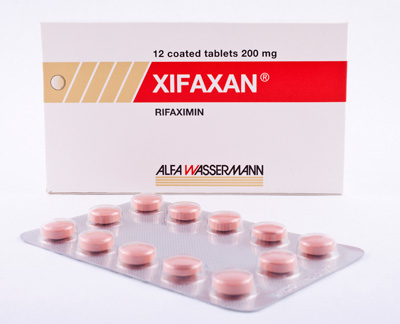 Rifaximin is a minimally absorbed oral antibiotic belonging to the rifamycin group, and acts by binding to the beta-subunit of bacterial DNA-dependent RNA polymerase resulting in inhibition of bacterial RNA synthesis. Rifaximin has broad-spectrum in vitro activity against gram-positive and gram-negative aerobic and anaerobic enteric bacteria, and has a low risk of inducing bacterial resistance.

Rifaximin’s additional pyridoimidazole ring makes it virtually nonabsorbable (< 0.4%) enabling it to achieve a high concentration in the gastrointestinal tract and to be active against enteric infection or abnormal floral states. Approximately 97% of Rifaximin is excreted in the feces as unchanged drug after oral administration, with 0.32% of the dose detected in urine and without detectable levels in bile or breast milk.

Rifaximin has antimicrobial activities against the majority of bacterial enteropathogens associated with diarrhea, and also has in vitro activity against Clostridium difficile, Helicobacter pylori, Yersinia enterocolitica, and Shigella species. However, Rifaximin has little effect on the normal gastrointestinal flora.

Development of resistance to Rifaximin is primarily due to a reversible amino acid substitutions in rpoB gene, and apparently is not plasmid associated, so the risk of horizontal transmission of resistance is low. Rifaximin does not select for significant resistance in the Gram-negative and Gram-positive intestinal flora during therapy, and resistant strains are unstable and disappeared rapidly when treatment is discontinued. Furthermore, negligible absorption of Rifaximin reduces the likelihood of the development of cross-resistance compared with systemic antibiotics.

Rifaximin is approved for the treatment of traveler’s diarrhea with dosages of 200 mg 3 times per day for 3 days, and the drug should not be used in cases complicated by fever or blood in the stool or in patients with diarrhea due to invasive pathogens. Rifaximin ameliorates bacterial diarrheal symptoms and significantly shorten the duration of diarrhea without significant effects on normal gut flora.

Rifaximin has been used for the treatment of irritable bowel syndrome (IBS). Among patients who had IBS without constipation, treatment with Rifaximin for 2 weeks provided significant relief of IBS symptoms, bloating, abdominal pain, and loose or watery stools.

Please refer to the full prescribing information for more details.

To proceed, kindly confirm if you are a medical professional?